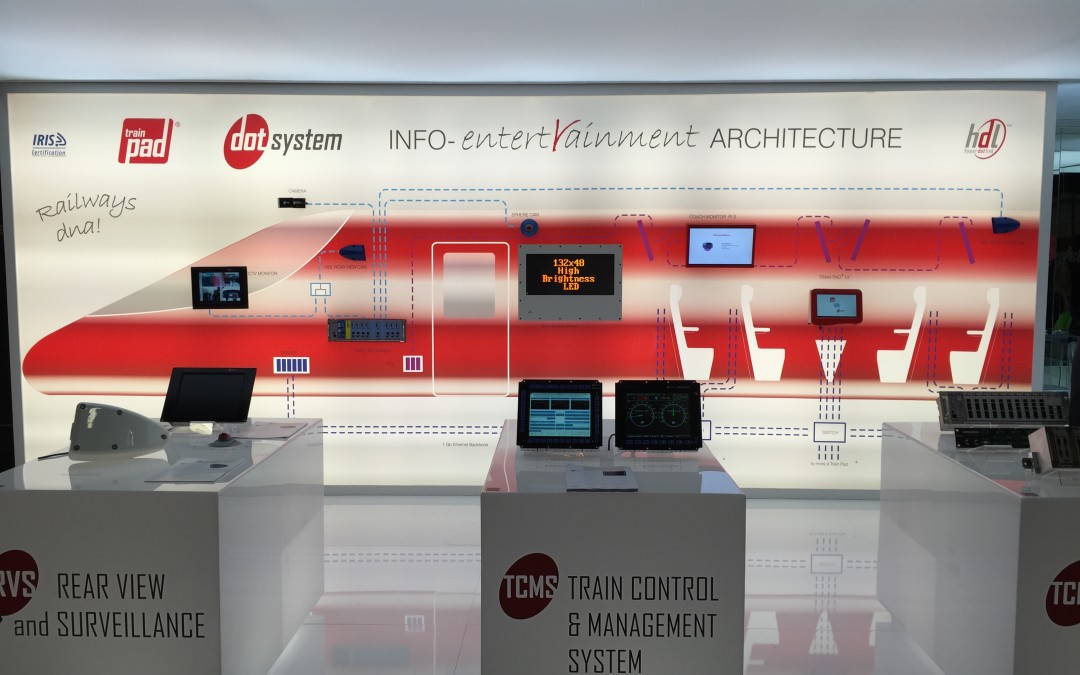 Dot System, the Italian leading company in solutions and products for the rail industry, comes back from Innotrans 2016 edition, held in Berlin from 20th to 23rd September, with positive results and basis for opening-up to new markets.

Over a hundred professionals of the railway market coming from all around the world have visited Dot System’s stand.

They had the opportunity to test and observe the new products exhibited by Dot System, with particular regard to the innovative Video communication systems, massively implemented on board of new trains or upgraded on circulating trains.

First of all TrainPAD®, the high-resolution ‘PAD’ device, destined to revolutionize communication and entertainment on board, in addition to safety and control systems for drivers and passengers on board, including ‘Rear View Safety‘ (electronic mirror control of passengers during the loading / unloading phases),’ Driver and CCTV Monitors‘, ‘Videosurveillance‘, ‘Video Recorders‘, ‘Diagnostic Recorders‘.

The presence of representatives of the Indian railway market’s players has been a significant new factor of Innotrans, that for Dot System has been a showcase for promising business opportunities. The Indian railway companies’ delegates have shown a concrete interest to new releases of the Dot System products exhibited in Berlin, recognizing the appeal and the high value in terms of technology and innovation for the railway trades. India, Turkey and Iran are confirmed to be the new “borders” of the rail transport industry, where undertaking new business challenges.

Innotrans – said Luciano Scaccabarozzi, President of Dot System – as in the last edition proved to be a fundamental moment of encounter and comparison for all worldwide railway market professionals.

The railway industry is experiencing a time of great turmoil: the international scenario sees the expansion of new markets, such as India, Iran and Turkish. We are directing our efforts and our activities in these countries.

Innotrans 2016 recorded the best results in its history, with an increase of 7% in the number of exhibitors and of 4% in the number of operators from previously issued edition. 2,955 exhibitors from 60 countries have shown their products and services at Innotrans. The 112,000 square meters of the Berlin Exhibition Grounds were fully occupied, making of the German capital the point of world railway industry encounter.